CMII faculty are designing course roadmaps and semester-by-semester guides for students interested in connecting their educational experiences at Georgia State with careers in the creative industries.

Atlanta’s studios and creative firms include prominently placed Georgia State alumni, and so in addition to the Atlanta Campus’ downtown location, students in arts and media programs are in proximity to career-launching resources and networks.

Arts and media jobs don’t always require a specific educational credential, because hiring decisions are dominated by a review of your experience and artistic portfolio. CMII will connect students to artistic creation and the creative economy.

Here are steps you can take to enhance your career readiness while a Georgia State student: 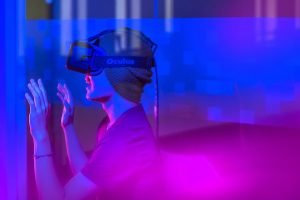 The prospects for careers connecting to virtual and augmented reality technologies seem bright, given the popularity of new headset technologies and platforms enabling any mobile device to power a virtual reality (VR) experience. Many technology companies are heavily invested in its success, including Google, Samsung and Facebook. A recent study by the market researchers at IDC predicts consumer spending on VR and augmented reality (AR) products and services will reach $11 billion in 2017 and eventually reach $215 billion by 2021. The highest growth is predicted to occur in the United States. The technology is growing in sophistication, and VR innovators promise soon to deliver experiences that are truly interactive, such as in games where multiple players live in the same virtual space and see it from different perspectives.

Factors to consider as you explore career options connected to VR technologies.

Part of the reason for optimism is that VR isn’t just for entertainment purposes, but is expected to generate value across many sectors. Think about landscape architects who want to show a client what a new house will look like and might want to deliver that experience in VR. Or health professionals who may come to value the immersive dynamics of VR as they undertake medical diagnoses at a distance, where the doctor might sit at a computer in Atlanta in a consultation with a patient from Singapore. Some see VR as likely to transform education because students can be virtually transported to places on the other side of the planet or to simulations of events that happened centuries ago. A 2017 report from Juniper notes that "VR is beginning to show potential in many other areas, with a major footing in applications such as military training, and offering opportunities to areas such as medical and even nuclear facilities.”

None of these predictions is certain and on several previous occasions VR was predicted to take off in ways that failed to materialize. Some commentators express concerns the hype about VR/AR exceeds the reality: the VR consumer systems (Oculus Rift, PlayStation VR, HTC Vive) can be complicated to use and have to be connected to expensive devices. Some users get nauseated when they put on the headgear. Andrew House, CEO of Sony Interactive Entertainment, was quoted in June 2017 as noting, “This is VR 1.0.”

Strong efforts are underway in Georgia to build VR companies. Firms such as Bento Box Entertainment, Floyd County Productions (which does production work for the TV show "Archer") and Trick 3D are expanding their VR project portfolios in ways that produce entertainment, marketing and training content.

Some experts argue that even if self-contained and sometimes goggles-isolating virtual reality experiences never fully launch, the prospects are much stronger for augmented reality systems, which provide informational overlays as a person sees the world through special eyeglasses. If so, then students preparing for careers in AR/VR companies are also picking up invaluable advanced technology skills connected to data analytics, informatics and visualization.

Helpful overviews and VR career advice are available at these sites: 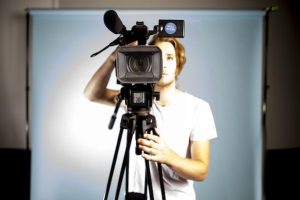 Georgia State students can connect to the film and TV production industry in many ways. Some students find ways to work as extras on set. It’s not especially helpful as career training, but the experience is interesting and a useful introduction to the realities of work on a sound stage. The film production sequence in the film major (which is coordinated not by CMII but by the School of Film, Media, and Theatre in the College of the Arts) provides pathways for students interested in developing skills in production (including lighting design and digital editing) or their interest in genres that include documentary film. And the journalism major, coordinated by the Department of Communication in the College of Arts and Sciences, offers a production-centered collaboration with Georgia Public Broadcasting.

A limited number of Georgia State students connect each year with the training programs of the Georgia Film Academy (a CMII-sponsored workforce study helped persuade state legislators to start the academy). The Georgia State major in film is the oldest and largest in the University System of Georgia. Georgia State alums work in nearly every regional studio.

Students interested in joining the film industry should consider doing an internship in the senior year.

About the Georgia Film Industry

Many milestones have connected Georgia to the film production world over the years: iconic Georgia projects such as "Deliverance" (1972) and "Forrest Gump" (1994) and locations in the state that have long connected to film and TV-related tourism (such as the tourism benefits still generated by "Fried Green Tomatoes" and the "Vampire Diaries").

But Georgia film and TV production work was ignited when the state legislature created a tax incentive program in 2008. As Jeffrey Stepakoff, executive director of the Georgia Film Academy, puts it, “In 2007, there was $242 million in economic activity here in Georgia in film and television. In this past fiscal year, we hit $6 billion in economic activity. So that’s a 2,500 percent increase in barely eight years.” Stepakoff was referring to 2016. The most recent data show a $9 billion economic impact. Georgia is the nation’s third most active production center behind Los Angeles and New York City.

About 300 major projects shoot in Georgia every year, including mega-franchise films such as "Fast and Furious", "Guardians of the Galaxy", "Spider-Man", the "Avenger" films and many other high-quality projects (for example, "Selma", "Flight", "Joyful Noise").  And a growing number of television programs shoot in Georgia as well: "The Walking Dead" (with executive producer Tom Luse, a Georgia State alum), the many hit series produced at Tyler Perry Studios, including "Auction Kings" and "Drop Dead Diva."

Helpful sources of information about film industry careers in Georgia: 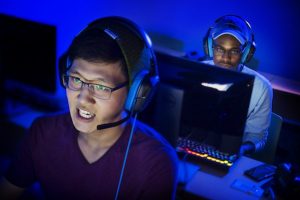 Game design degree programs offer career pathways into social media, game development, programming and other highly sought after jobs. Game designers play an active role in the industry and connect to work that includes the organization of game levels, animation, art and character design. Later in their careers, they may also connect to project and team management. Many point to significant investments in virtual and other immersive entertainment technologies as a good sign for continuing demand for games over time.

A B.A. or B.S. degree is typically all that is required for entry-level positions, which can start with quality assurance jobs or, in smaller startups, with more significant programming and design duties. Some enter the industry with majors in game design, while others move into early jobs based on computer science training.

Factors to consider when exploring a game design educational trajectory.

Game design is a $30 billion industry in the United States. Estimates vary on total employment in the United States, but range from 30,000 to 70,000 full-time positions. In 2015 the annual median salary for application software development was $98,260. Some who earn game design degrees end up taking on other work, such as in Web development or computer programming. Growth in the number of game developer jobs persisted even during the last economic downturn, but has declined since 2014. Speculation is that game development has shifted from large design companies employing more workers to small independent startups that begin with smaller development teams. In technology-connected positions, such as virtual and augmented reality, job growth is strong. And while the Esports industry is still small, it is growing very quickly. 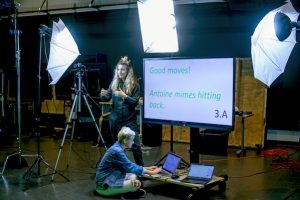 Jobs in TV can seem glamorous, but the hours are long and entry-level pay can be low. Given competition for jobs, students with a high degree of perseverance and drive are most likely to succeed. And over the course of a career, it’s not uncommon their jobs will frequently change, requiring talented workers to relocate.

Georgia State degree programs connect to TV industry preparation in several ways. The journalism major trains students for work in the broadcast news industry, and the film major teaches production skills that are as useful to television work as to traditional filmmaking. In CMII, the goal is to supplement these degree sequences by adding advanced technology training. The main CMII facility is equipped with systems for virtual and augmented reality and motion capture.

MORE ABOUT WORKING IN TELEVISION

Television is one of the most pervasive 21st century technologies. More than 2,900 TV broadcasting and cable companies operate in the United States, generating more than $120 billion in annual revenue. More than 95 percent of American households own TVs. It also remains the most popular mass media in the United States. TV companies and associated networks (and online providers such as Netflix and Hulu) hire many individuals who work onscreen and behind the camera.

Large TV stations, such as those found in Atlanta, employ hundreds of people. In smaller markets a TV station might only employ 20 or 25. But TV is also changing. New models of distribution, cord-cutting and pressures to unbundle cable packages have heightened competition in the industry, and a high degree of industry consolidation is underway.

A recent analysis by Vault.com shows “employment in television is expected to grow in coming years. Consolidation of stations under large networks; new technologies that require less specialized training to operate; and competition from cable systems, satellite and streaming video will all influence the rate of growth and the type of jobs available. Television is evolving as it races to keep pace with new technology, and workers who remain savvy about digital devices and platforms will experience the most success.”

A good overview of the technical skills you should consider developing to work in TV was recently offered by Work in Entertainment. 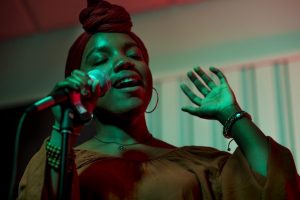 The global music industry is in transition. The large corporate studios that handled record and then CD and now streamed downloads have given way to smaller recording studios. (By some estimates, more than 300 are operating in Atlanta alone.) The work is more typically gig- and project-based and offers fewer pathways for lifetime work in a single large studio.  Publishing and licensing companies and even mastering facilities and tour support companies are often run with lean staffing.

The Georgia State program strongly emphasizes entrepreneurship because the best way to develop a music industries career is to invent the job for yourself. We also strongly recommend students take advantage of the many CMII-organized opportunities for internships.

The principal training pathway available to Georgia State students interested in music is the School of Music.

Work in the industry is thriving, and Georgia has long played a key role in nurturing music industry talent. More than 20,000 Georgians work in the music industry and more than 16 active symphony orchestras perform in the state. But even higher visibility attaches to country music, jazz, hip-hop, gospel and other genres of music that have made the state a music capital.  With new investments recently made by the state legislature to provide tax credits to lure work into Georgia, the chances are good the sector will grow in the next five years. Six years ago, when the last comprehensive estimates were made, the state music industry was generating an annual economic impact of $3.7 billion.