Douglas A. Blackmon is a Pulitzer Prize winning writer, scholar, teacher and filmmaker.

He is the author of the New York Times bestseller, Slavery by Another Name: The Re-Enslavement of Black Americans from the Civil War to World War II, which won the Pulitzer Prize for General Non-Fiction Book in 2009. He was a finalist for another Pulitzer Prize in 2011 for coverage in the Wall Street Journal of the 2010 BP oil spill in the Gulf of Mexico and a member of the Journal staff awarded a Pulitzer Prize in 2002 for coverage of the 9/11 terror attacks.

His first film, based on Slavery by Another Name, premiered at the Sundance Film Festival in 2012, attracted more than five million viewers in its first broadcasts on PBS, and has been rebroadcast thousands of times since then. He is the co-author, with former Attorney General Eric H. Holder Jr., of the forthcoming book, Pursuing Justice, (2020), and is currently producing The Harvest, a new film for broadcast on PBS exploring the contradictory outcomes of America’s effort to racially integrate public schools over the past 50 years.  From 2012 until earlier this year, he was a member of the faculty and a senior fellow in presidential studies at the University of Virginia’s Miller Center of Public Affairs, and host of American Forum, a 30-minute television interview program seen on more than 250 public television stations across the U.S.

Slavery by Another Name, published in 2008, is a searing examination of how the enslavement of African-Americans did not end with the Civil War, but persisted deep into the 20th century and profoundly sculpted current American life. It has been reprinted more than a dozen times.

Blackmon has written extensively over the past 25 years about the American quandary of race — exploring the integration of schools during his childhood in a Mississippi Delta farm town, lost episodes of the Civil Rights movement, and, repeatedly, the dilemma of how contemporary societies grapples with a troubled past.  Many of his stories in the Wall Street Journal and the Washington Post explored the interplay of wealth, corporate conduct, the American judicial system, and racial segregation. International assignments have included the fall of the Berlin Wall in 1989, the reunification of East and West Germany, the Civil War in Croatia, Bosnia and Serbia, post apartheid South Africa and the Yugoslavia war crimes tribunal at the Hague.  Political assignments included the inauguration of President Barack Obama in 2008, presidential campaigns in 1988, 2002, 2008, 2012, and 2016, the post presidency of Jimmy Carter, and Bill Clinton as governor of Arkansas.

Between 2012 and 2018, Blackmon’s produced and hosted more than 250 episodes of American Forum, a weekly program featuring interviews with national leaders, policy makers, top journalists and leading historians and political scientists. The program aired coast-to-cost on U.S. public television channels, across much of Canada, and reached millions of viewers through pioneering used of Facebook Live social media. Its goal was to engage the nation’s greatest and most influential minds in serious and civil discussions about the nation’s most pressing issues.

Prior to the University of Virginia, Blackmon was the longtime chief of the Wall Street Journal’s Atlanta bureau and the paper’s Senior National Correspondent. Blackmon has written about or directed coverage of some of the most pivotal stories in recent American life, including the election of President Barack Obama, the rise of the Tea Party movement and the BP oil spill.  For more than a decade, he oversaw coverage of 11 southeastern states for the Wall Street Journal, including directing the Journal’s acclaimed coverage of Hurricane Katrina and the failed federal response after that disaster, the Journal’s investigation into the training and preparations of the 9/11 hijackers in Florida, as well as immigration, poverty, politics and daily reporting on more than 2,000 corporations based in the region. 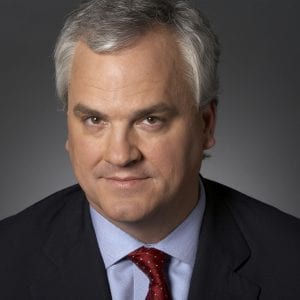